Case Study: Ashley and Martin Treatment Reverses Hair Loss and Gets Rid of Dandruff As Well

Brent* had been losing his hair for approximately two years when he came to Ashley and Martin. At first the loss had not worried him, but as time went on his scalp became more visible through his thinning hair and for the past four weeks seeking treatment had been playing on his mind. Having submitted an enquiry online after searching for hair loss companies, he attended his first appointment having never tried any hair loss remedies available to him over the counter.

The consultant got to know Brent and his motivation for coming to Ashley and Martin. Brent, like many young men, was concerned about the impact his hair loss was having on his appearance. He was only 22 years old and his hair had suffered a serious loss in density. The consultant performed a scalp examination, noting that Brent also suffered from dandruff. Brent’s hair was thin all over, with a particular decrease in density throughout the frontal area and crown. Brent had already told him that his father had lost a great deal of hair and this information, coupled with the pattern of loss the consultant was seeing, led to a diagnosis of Male Pattern Hair Loss, Norwood III vertex.

His consultant offered Brent a RealGROWTH® treatment program that consisted of anti-androgens, a topical solution, herbal supplements and specialised hygiene products to protect the newly growing hair. Not one to make rash decisions, Brent went home to think about everything he had learned at his appointment.

Three weeks later Brent called the clinic to go ahead with treatment. He was booked in to see the clinic hair loss doctor to have his medication prescribed and offered his choice of appointment times for laser therapy treatments.

A busy man, Brent was unable to attend regular laser therapy appointments, but took his medication regularly and looked forward to attending his first Ashley and Martin Review.

When Brent returned to see his consultant sixteen weeks later for his first progress review, his hair was thicker and healthier than it had been in years. Not only had his temporal recession reversed and overall density improved, but his dandruff had been cleared up by the topical solution he was using. He could not have been happier with the results he had received using Ashley and Martin’s RealGROWTH® medical hair regrowth program. 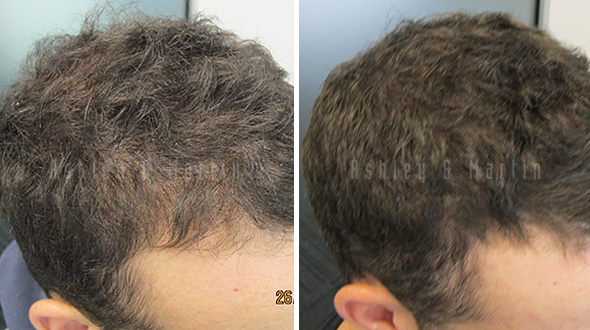 Jarred* had started to lose his hair at a remarkably young age.  He had been just 14 years old when he first noticed his hair begin to thin.  Now, at 19 years old, he was extremely concerned about his appearance.  He felt he was far too young to be balding.  Jarred had been thinking about doing something about his hair for the last few years, but being so young he felt awkward and overwhelmed.  After he had heard about Ashley and Martin on the television, he discussed treatment with his family and they urged him to come for a consultation to see what we could do to help.

He contacted Ashley and Martin to book a free consultation as soon as possible.  The consultant examined Jarred’s hair; he was thinning predominantly at the front and around his hair line.  This Norwood type II hair loss would be best treated with a combined approach of prescription medication, herbal supplements, topical solution and laser therapy.  The consultant explained to Jarred how each of the components of the RealGROWTH® treatment program would work together to stop his hair from shedding and subsequently re-establish a healthy growth cycle.

Jarred was very pleased to hear that there was a way to reverse the hair loss he had been experiencing for almost all of his teenage years.  He signed up for a RealGROWTH® program and was booked in to see the clinic doctor to have his medications prescribed.

By the time he returned for his first Ashley and Martin Review, Jarred had already noticed the improvement.  Comparing photos taken in his first appointment to ones just taken, Jarred could see the increase in density all over and the new growth in his temporal region.  The outstanding results he had already experienced made him excited to see the photos that would be taken after sixteen more weeks on the program. 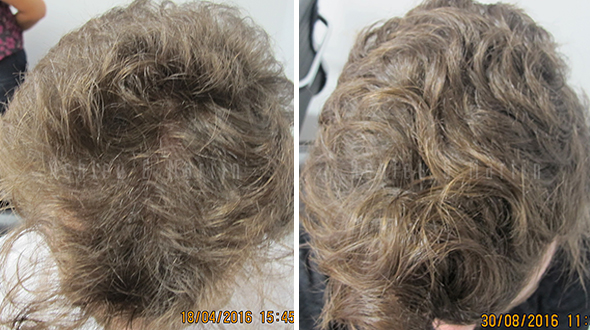