He was now 21 years old and already suffering from Norwood stage III vertex loss. His temporal region had receded most of the way back to his crown and his hair had become sparse all over. Such advanced hair loss while he was supposed to be in his prime had shaken Neil’s confidence. His mother and both grandparents suffered from varying degrees of hair loss, but it had still been a shock to watch his own hair disappear so early. With the intention of signing up for treatment himself, Neil attended an appointment of his own.

He began treating his hair with medical interventions different to those that his mother had been prescribed, however one thing their treatment had in common was the recommendation of laser therapy. Not wanting to come in to the hair loss clinic to attend laser therapy appointments, Neil purchased a laser cap three months after starting his RealGROWTH® program. This in-home low level laser therapy device was something he could share with his mother so the both of them could boost the results they were getting from their medication programs. People had already begun commenting on his hair and Neil was keen to give his treatment the best chance possible.

It had felt good to receive complements from colleagues who had noticed the turnaround in his formerly diminishing hair. At his four month Ashley and Martin Review Neil was feeling optimistic and enthusiastic about the results he had seen take place already. He assessed the progress photos taken for him to compare his current hair growth to the level of loss he was experiencing when he first came in with his consultant. The vast changes he was seeing between his first and second set of photos confirmed what his colleagues had been saying. The positive feedback Neil had received had restored his confidence and he had found the courage to pursue a more rewarding career. 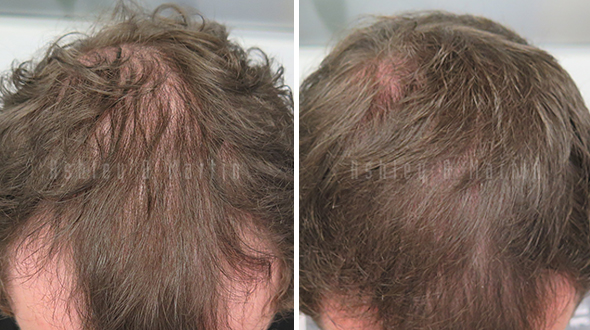 Jeff’s* fine hair had been thinning for over fifteen years. Now all that was left at the front was a diffuse layer of hair from his hairline to the crown. It had not come as a surprise to him when his hair had started falling out around his 24th birthday, balding ran in his family. Both Jeff’s father and grandfather had also lost their hair as younger men. For five years the idea of seeking medical intervention for his hair loss had been playing on his mind. Finally Jeff went online to find out what treatment was available for people in his position and found Ashley and Martin. He contacted us using the online enquiry form on the Ashley and Martin website.

The 39 year old spoke to his consultant about his insecurities as a single man who was losing his hair. It was hard to feel confident meeting people when he was acutely aware of his thinning hair. The consultant, understanding that it is important to feel good about yourself, conducted a scalp examination to determine the extent of the hair loss. While Jeff had lost an extensive amount of hair from his frontal hair line back to his crown, she could see enough viable vellus hairs in his area to give her hope of being able to help Jeff with a medical solution his problem. Had this area been devoid of these slight, almost translucent hairs the only options left available for Jeff would have been a RealHAIR® hair transplant or to wear a RealLOOK® hair system to cover the area.

The consultant explained to Jeff how his hair loss worked and what Ashley and Martin’s RealGROWTH® would be able to do to intervene in this process to enable him to regrow his hair. The consultant made sure he had a realistic picture of what could be achieved with medical treatment after such a prolonged amount of shedding. Happy with his personal chances of success and the company’s overall 98% success record, Jeff decided to treat his Norwood level Va loss with a RealGROWTH® program without wasting another moment.

Flying in and out regularly for work did not leave Jeff much time to attend the clinic for laser therapy appointments, however with consistent adherence to the rest of his treatment program Jeff’s hair began to return. After four months, he could see the new hair beginning to grow in his large balding patches. Family members had started commenting on how good it was starting to look and couldn’t believe the treatment was working so quickly. After eight months Jeff’s hair had increased in density and a new covering of hair had grown from his frontal hair line to his crown. It was not quite as dense in this area as the rest of his hair had become, but the number of positive comments he received and the newfound confidence he had gained had been worth every bit of his treatment. 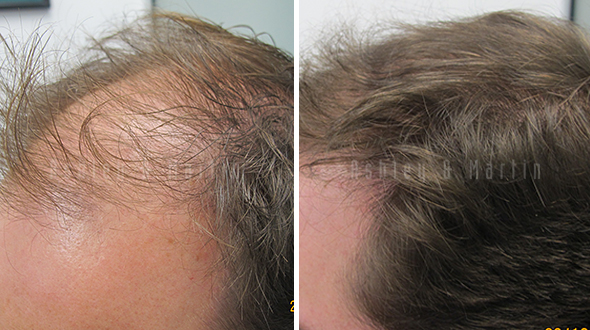 Case Study: Client Excited to Think About Changes At Next Ashley and Martin Review

Benjamin* came to his first Ashley and Martin review with low self-esteem and a hair loss problem that had been present for two years. To his knowledge it was only himself and his brother that were suffering from this problem in his family and he was not feeling good about the way it made him look. Having seen advertising for Ashley and Martin on television, Benjamin found our company online and sent in an enquiry through our website.

During his initial review Benjamin told his consultant that he had been thinking about treating his hair for a year but had never done anything about it. His consultant examined Benjamin’s scalp and could see that he was suffering from thinning all over that was most prominent around the crown with some recession from the frontal hairline into his temporal region. This Norwood level III loss would be able to be treated with a RealGROWTH® medications program or an in home laser therapy device known as a Laser Cap. Benjamin opted to treat his hair loss with a RealGROWTH® program and three days later signed up for treatment.

At Benjamin’s next Ashley and Martin Review he was amazed at the changes he had undergone. In fact, the generally happy and personable 34 year old could not believe that the program had worked so well for him. There had been a part of him that had not believed in the treatment he was undergoing, but the evidence in front of his eyes told him otherwise. After only four months on the program his hair was shedding at a normal rate, his hair density had improved and the balding spots were beginning to cover over. He had hair in his temples again and his hair coverage looked less patchy. But that was not the only improvement. Since starting his RealGROWTH® program Benjamin’s self-esteem had significantly improved as well. It was exciting to think about what might have changed by the time he attended the next progress review. 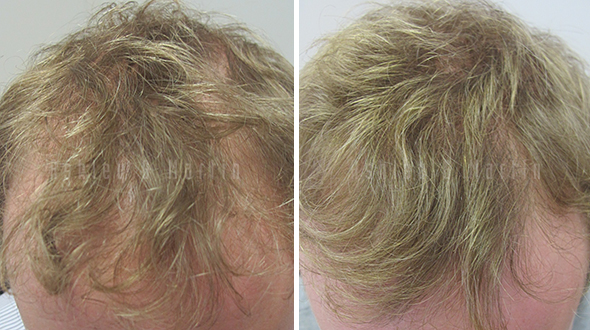