Jack* was highly conscious of his thinning hair. Although it had only affected his self-confidence a little, he felt 23 was too young to be going bald. From the moment he had started losing his hair two years ago, he had been thinking about finding a hair loss clinic to help him with his problem. Concerned about this change in his appearance, Jack went online to find out about hair regrowth and find a hair loss specialist to help him.

Hoping to find a way to fight the genetic condition he had inherited from his father, Jack met with an Ashley and Martin consultant. After conducting a scalp examination, looking at Jack’s receding hair line and severe loss of density on his crown, the consultant recommended what he believed to be the best hair loss treatment for Jack’s individual stage of hair loss. The hair growth products the consultant recommended Jack use would target his hair loss on several fronts. Medicinal, nutritional and herbal, complimented with laser therapy treatments. Excited about the prospect of regrowing his hair so easily, Jack enrolled on a RealGROWTH® medication program.

Before he returned for his first Ashley and Martin Review four months into his treatment, Jack knew the results of his program were noticeable. Friends and family had been commenting about how much better his hair was looking and he could see his frontal hair line was much thicker than when he had first come to Ashley and Martin. His consultant took photos of his hair again and together they looked at the differences between the first set and the ones just taken. Even though he had known the program was working, Jack was amazed at the changes that had taken place. His frontal hair line had come forward more than he had realised and the overall density of his hair had increased substantially. The balding patch that had been developing on his crown was now covered over with newly growing hair and Jack was extremely happy with his hair growth treatment. 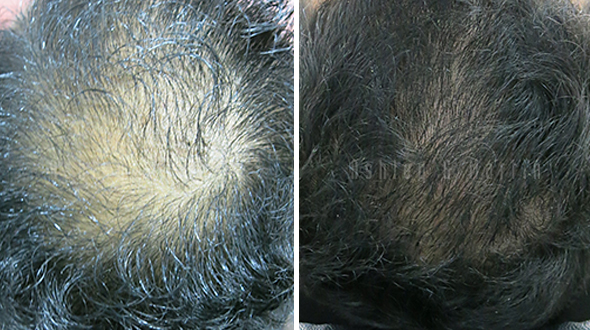