In just three short years, Mal* had gone from having a full head of hair to having a deep recession in his temporal region and a rapidly balding crown. Mal’s hairdresser had given him a shampoo that was designed to address his hair loss after a haircut one day. Unfortunately, this simple, un-medicated remedy did not have the desired effect. Mal’s hair continued to shed at an alarming rate.

He had discussed his hair loss with a member of his family and they had encouraged him to seek professional help. Twenty-six years old and worried about being bald before he was 30, Mal went online to look for Ashley and Martin after seeing an advert on the television.

Mal’s consultant discussed the outcomes he was hoping to achieve using Ashley and Martin’s RealGROWTH® program. Assured that he had realistic expectations of the hair regrowth products Ashley and Martin offered, the consultant had an in-depth conversation with Mal about what would be involved in treatment and what he could realistically achieve with a medications program.

Confident that this was the right course of action for him, Mal signed up for a RealGROWTH® program straight away. A combination of anti-androgens, herbal supplements, topical solution and regular laser therapy treatments would work together to address Mal’s Norwood IV loss.

Mal’s RealGROWTH® program worked so well within the first five months that family and friends began to notice the dramatic turnaround in his hair loss and comment on it. Although early days, Mal was thrilled with the results of his program. His hair had increased in density a staggering amount, his temporal recession decreased and his crown was well on its way to being hidden under hair again. Mal was very happy with his decision to sign up for treatment upon first meeting with his consultant. 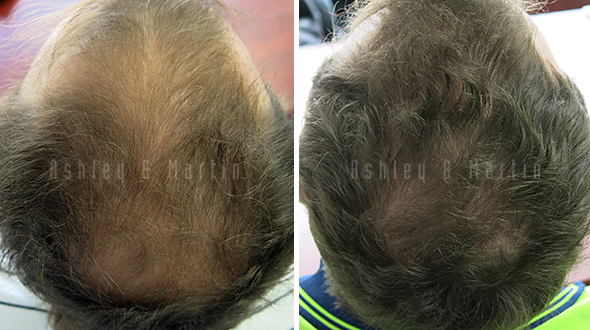