Chris* could not remember a time in the past five years when he did not want to treat his hair loss. The moment it had started he had known he was not ready to watch his hair disappear. After seeing an advert for Ashley and Martin on the television he realised it was time to finally act and picked up the phone to make an appointment.

During his initial appointment, Chris disclosed that the rapid decline in his hair had not been terribly surprising. Men on both his mother’s and father’s sides of the family had all suffered with varying degrees of hair loss. The pattern of loss together with the fact that Chris was physically healthy with manageable levels of stress in his life, lead the consultant to diagnose him with male pattern hair loss, Norwood IV.

The consultant suggested Chris use a combination of prescription medication, herbal supplements and laser therapy to combat the advanced hair loss he was seeing. With this degree of loss, it would take time to reverse the damage done, but there were still a great deal of viable hair follicles to work with across Chris’ scalp and improvements could be made.

Chris opted to buy a LaserCap™ to go with his RealGROWTH® medical hair regrowth program. This would enable him to treat his hair at home instead of finding the time to attend the clinic each week for laser therapy treatments. An avid traveller, Chris was pleased that the clinic would be able to provide him with a letter for customs, enabling him to take his medication with him wherever he went.

Chris found his in-home treatment easy to perform and he quickly established a routine. Sixteen short weeks later he was back at the clinic for his first Ashley and Martin Review to assess the progress he was making on his RealGROWTH® program. Together Chris and his consultant looked at his progress photos side by side. Both men could instantly see that Chris’ hair was making great strides. His overall density had improved greatly and he was relieved to see that he had gained new hair where he had lost the most, making a start on covering over his balding crown.

Nineteen year old Kris* came to Ashley and Martin with his partner along for support. He was concerned that his hair was in poor condition and getting quite thin so young. The consultant he met with could see that Kris was already presenting with a bilateral recession as well as thinning hair from his frontal hair line to the crown. Kris confided that his older brother also has hair loss and had made his own appointment to meet with an Ashley and Martin hair loss specialist the following week. Male pattern baldness was a condition that most of the men in Kris’ family suffered with.

Kris’ consultant praised him for coming to see him so soon. Because of Kris’ swift action, his consultant was confident that a RealGROWTH® medical program would achieve the results Kris was looking for. The comprehensive approach of the RealGROWTH® program would stop Kris’ excessive hair loss in its tracks and improve his hair’s density. The consultant was so confident that this was the best hair loss treatment for Kris that a money back guarantee was put in place.

Encouraged by his consultant’s faith in the program he was recommending, Kris booked in to see the clinic hair loss doctor the following week, excited to get started on his treatment. Taking only two minutes per day, the Kris’ treatment plan was easy to work into his daily lifestyle, the only part of his treatment that took time to do were his fortnightly laser treatments at the hair loss clinic.

Diligently following his program, Kris attended his laser therapy appointments and took his medication daily. And after six months he was over the moon with the results. Looking at his progress photos side by side, Kris could not believe how thin his hair had been six months previously. His hair was healthy and showed no signs of the genetic condition that had brought him to Ashley and Martin in the first place. 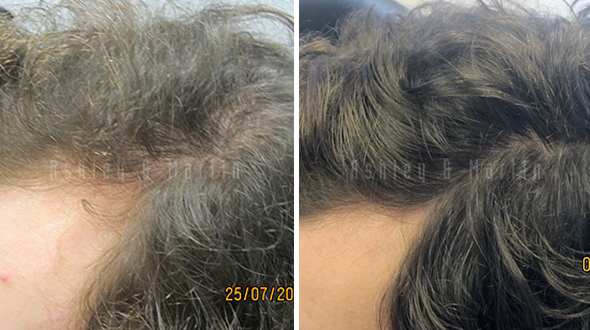 Case Study: Ashley and Martin Staff and Treatment Gives Client What Was Missing at Another Hair Loss Clinic

The previous year Travers* had visited another hair loss clinic wanting to treat his hair loss. The six month program he had been sold at the time produced limited results and in the end he had left, dissatisfied with the poor customer service he had received.

When the 27 year old contacted Ashley and Martin online, he was hoping to find an effective treatment option and wanted to find out what, if anything, Ashley and Martin did differently to what he had tried before.

The consultant he met with took him through everything that was involved with hair loss treatment at Ashley and Martin. Travers noted that the main difference between the treatment he had been sold elsewhere and this was the involvement of medical practitioners. While there were small components that were the same, prescription medication with oversight from the clinic GP and guaranteed results was what set the Ashley and Martin treatment apart.

Wanting to beat the androgenic alopecia he had inherited from his grandfather and uncle, Travers signed up for treatment. The consultant had taken photos of Travers’ hair loss so they could both track the changes the medication he was about to start taking would make. He was booked in to see the clinic GP to have his medication prescribed and sent home with twelve months’ worth of hair growth products.

Travers attended the clinic every fortnight to have laser therapy sessions and although he skipped using his topical solution on the odd occasion, he saw his hair begin to improve. The staff in the clinic checked in with him on a regular basis and he knew he was always welcome to make an appointment to see his consultant or the clinic GP any time he needed as part of his program.

At both four and eight months, Travers met with his consultant to review his progress on the treatment plan. At both of these appointments the changes in his hair were reflected in the progress photos taken, it was evident his hair was continuing to improve throughout the treatment plan. The Ashley and Martin treatment and staff had given Travers what he had been looking for all along. 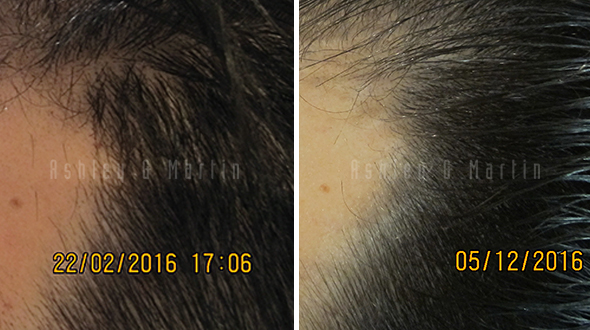