Case Study: Client Walks into Ashley and Martin to Make Appointment and Walks out Ready to Start Treatment

Ajay* had been thinking about seeking help for his hair loss for the last six months. And today was the day to do something about it. He walked in to the Ashley and Martin clinic on the off chance that there may be an appointment free that day. As luck would have it, there was an appointment free for Ajay without too much waiting.

The 26-year-old, concerned that his hair loss was making him look older than he really was, had researched the best hair loss treatments online before coming to Ashley and Martin. He thought he had been losing hair for the past year, however upon examination his consultant thought it was more likely that Ajay’s hair loss had been subtly taking place over the past four years.

On his mother’s side of the family, Ajay’s uncle also suffered from the same hair loss condition as he did. This genetic link, coupled with the pattern of loss the consultant was seeing led to a diagnosis of male pattern hair loss, Norwood III.

Needing to see a doctor for a check-up and to have his prescriptions written before commencing treatment, Ajay was slotted into an appointment with the doctor that same day also. With enough prescription and non-prescription hair loss products in hand to last for the entirety of his program, and his topical solution being compounded to his needs by the Ashley and Martin pharmacy, Ajay went home happy that he had been able to get so far into the process having just walked in off the street.

In the early stages of his program, Ajay followed the directions he was given closely, however after four months he relaxed a little and forgot to take his medication every day. Despite the less stringent commitment to his program in the latter stages, Ajay’s eight month progress review was full of positive news. The balding spot on his crown was covered in new, healthy hair and the overall density of his hair had improved out of sight. 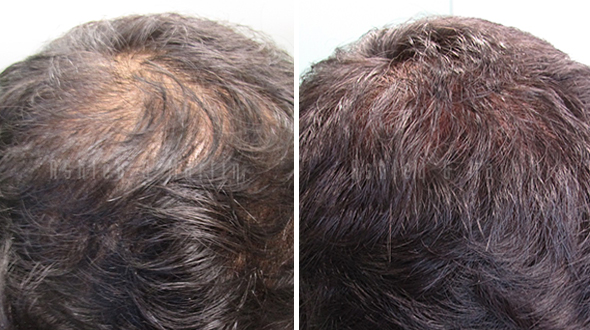 By 31 years old, Jerry* had developed a pronounced bald patch on the crown of his head and the frontal region of his scalp was showing a severe decrease in density. This startling loss had taken place in just six months. Twelve weeks after the rapid shedding began initially, Jerry began to wonder if he should find a hair loss specialist to help him. Eventually a friend of Jerry’s recommended he contact Ashley and Martin for help. Searching online, Jerry found our contact form and quickly filled it in. A representative called him back shortly after to book an appointment at Jerry’s preferred clinic.

Basic information gathering found that Jerry’s brother was also suffering from hair loss. With no other medical issues playing their part in his swiftly decreasing hair density, Jerry was diagnosed with male pattern hair loss and placed at a level IV on the Norwood hair loss scale.

By the time Jerry reached the end of his initial consultation, he had come to the decision that treatment was the right option for him to pursue. He was not feeling good about his hair loss and here in front of him was a way to address his concerns about his appearance.

Part of the Ashley and Martin Review process was to look at pictures taken in his initial consultation alongside ones taken moments before. After taking his second set of progress photos the consultant showed Jerry the cumulative changes that had taken place over the last eight months. If he had thought the difference was impressive after four months, the difference after eight was astounding. There was still a slight loss on his crown, however the size of his bald patch had decreased substantially and there was diffuse hair across the tiny patch left. Looking at himself from the front, he could not tell that eight months ago he had been balding. His RealGROWTH® program had given him back a strong frontal hair line. Jerry felt positive about his whole experience at Ashley and Martin. 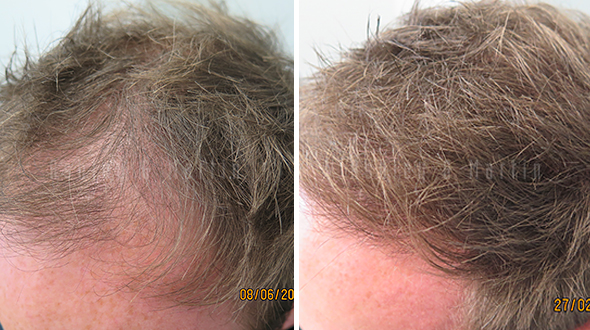