Adam* had always had a thick head of jet black hair but in the last 6 months it was looking and feeling different. There was a history of family hair loss on Adam’s father’s side and at 32 Adam knew this was the start of it for him.

To make matters worse Adam was in the process of changing his career from that of an Accounts Manager to joining the Australian Army. Having taken the decision to make such a drastic change in his life Adam was now concerned with the question of how could he keep up to his strong athletic image and gain the respect from his Army peers when he was losing his hair.

Adam searched the Internet for Hair Loss Specialists and was impressed with the informative Ashley and Martin website. With ease he scheduled his initial appointment to meet with an Ashley and Martin consultant.

Upon examination of the scalp by the hair loss consultant, Adam’s suspicions were confirmed. Recession had indeed started albeit gradually at the hairline. Adam was diagnosed with Norwood II male pattern baldness which would only get worse over time if left untreated. A RealGROWTH® medical treatment plan was recommended and Adam was made aware of exactly how the treatment would reverse the recession and stabilize the rest of his hair. It was also explained to him that he had a 98% chance of new hair growth.

Adam didn’t need any time to make his decision; he had his final check up with the clinic Doctor and signed up for the treatment program all on the same day.

8 months later Adam was thrilled with his results. He had been diligent with the use of the program and this had paid off for him. He felt much more confident in his appearance, and rather than worrying about his hair, he had been able to turn his focus to pursuing his dream career. 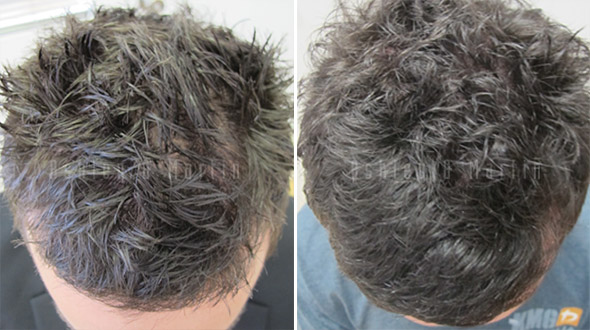