Whilst Ian’s* self-confience had not been affected by his hair loss, he was concerned about how he would look without hair. And having gone from a full head of hair to a sparse covering from his frontal hair line all the way back to his crown in just over six months, he saw going bald before he was 22 years old as a very real possibility. Having just started work in an industry that required him to interact with the community on a daily basis, he was eager to maintain his hair quite some time longer. The stories he saw being told on TV gave him hope that Ashley and Martin could help him too, so he found the online contact form and requested a call back.

Being young, Ian was not keen on sharing his concerns with anyone else and attended his appointment alone. He had not even told his father about contacting Ashley and Martin. Though he knew he would understand; it was his father that had passed the hair loss gene on to Ian. Sharing his concerns about being so young and having such advanced hair loss with his consultant, she reassured him that medical hair loss treatment would be able to make a difference to his Norwood III vertex loss. Designed to target the root cause of hair loss as well as regrow hair, the RealGROWTH® treatment would first work to slow Ian’s rapid shedding to a natural rate, then move dormant follicles into their growth phase. Keen to get started as soon as possible, Ian enrolled on a RealGROWTH® medical hair regrowth program straight away.

Six months after starting treatment, the 21-year-old sat down with his consultant to review his progress on the program. Still having told no one he was treating his hair, it was good to have the visual feedback to show how much hair he had regrown already. Looking at comparison photos that showed much thicker strands of hair and a denser coverage, Ian was pleased and relieved that he would be able to maintain his hair just as he had wanted. 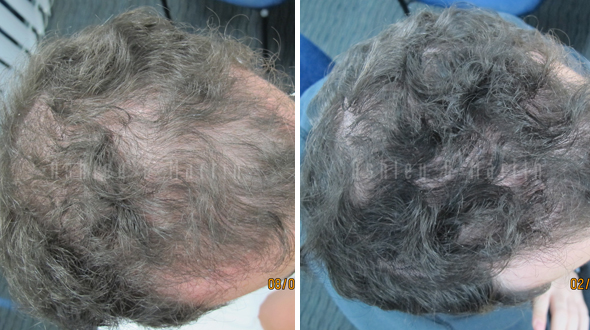 Knowing that his friend had been thinking about treating his hair loss for the past six months, a workmate had told Jorge* about the Ashley and Martin clinic nearby. Walking in to the clinic hoping an appointment would be available for him to attend straight away, Jorge found the thriving clinic was busy at that time but he was able to book the next available appointment and come back to meet with a consultant.

Losing hair in the same way his maternal grandfather had, Jorge was not surprised when he was diagnosed with male pattern hair loss. Not wanting to waste his time hoping that over the counter products would work for him, he was extremely interested in the medical aspect of the Ashley and Martin hair loss treatment approach. Fit, healthy, and enjoying the beach culture in Australia, Jorge looked after his body and opted to start his program straight away. Making an appointment to see the clinic doctor and have his medication prescribed, Jorge was happy he was finally taking the first steps to addressing the way his hair loss was making him feel about his appearance.

Working next to the Ashley and Martin clinic, it was easy for 32-year-old Jorge to regularly attend laser therapy appointments to boost the results of his mediation. And gradually, the damage that three years of genetic hair loss had done began to disappear. After four months of laser therapy and medical hair loss treatment, Jorge attended an Ashley and Martin Review appointment to monitor the results of his program. Having started treatment with the expectation that the majority of his new growth would take place between four and eighteen months of treatment, Jorge was happy to see that his Norwood level III hair loss was already significantly improved. New hair had increased the density of his coverage across his whole scalp and he was glad he had listened to his friend and enlisted the help of Ashley and Martin. 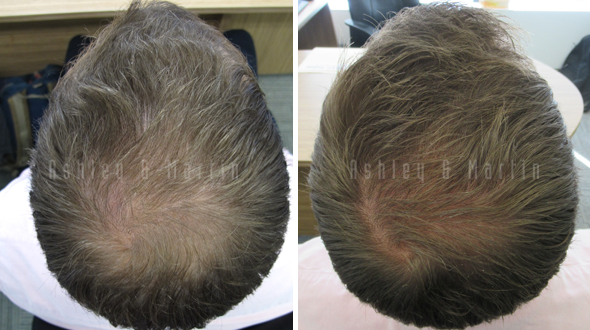