With no family history of hair loss, it was a worry to Kristoff* that he had started to develop a sizable bald patch on the top of his head. And as a man who dealt in facts and certainties, he wanted to be sure he was seeking help from a reputable source when it came time to treat his hair. Seeking advice from different sources, a friend told him that Ashley and Martin was the best place to go if he wanted to regrow hair. So, trusting his friend, he called the local Ashley and Martin clinic to find out more.

Attending a free consultation, Kristoff told his consultant he had been losing his hair for the past five years and, to his knowledge, there was no medical or genetic reason this should be happening. Performing a scalp examination, the consultant diagnosed Kristoff with Norwood level III male pattern hair loss. Whist he may not have close relatives suffering in the same way, the cause was definitely genetic. Affected by a hormone called DHT, Kristoff’s hair follicles had decreased in size, growing finer, thinner, and shorter hair, eventually becoming dormant. A good candidate for medical hair regrowth, the consultant provided all the information Kristoff would need to make an informed decision. And after going home and thinking things over, Kristoff decided to move forward with medical hair loss treatment.

Diligently adhering to the treatment routine recommended to him by his hair loss consultant and the clinic doctor, Kristoff took his medication and applied his RealGROWTH® solution every night, making the time to come in to the clinic and attend regular laser therapy appointments.

It did not take long for Kristoff to realise that doing his due diligence and choosing a reputable hair loss clinic to help him regrow hair was a worthwhile investment. The 54-year-old successful business man was able to see a significant reduction in the size of his bald patch and the hair that regrew was thicker and healthier than it had been in years. 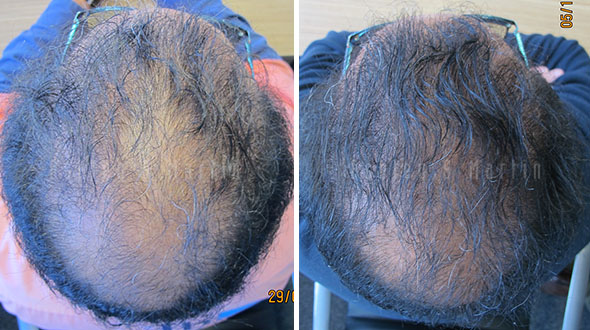