Derek* had been watching Ashley and Martin hair loss advertisements on the TV for years but it was only in the past two years that they had resonated with him. He’d been considering treatment for his hair loss for nearly a year, he was now 55 years old and his hair was starting to thin at a rapid rate. His vertex and frontal hairline were depleting and Derek was worried that soon all of his hair would be gone.

Once he made the decision to take action it was very easy take the first steps. Derek used the Ashley and Martin website to make an online enquiry and was contacted by his nearest clinic to arrange a date for his first free consultation. Upon examination, Derek’s hair loss was diagnosed at Norwood level III vertex. Although he had no family history of hair loss, his age and other lifestyle factors had contributed to the problem.

Reassured by the proven science behind the treatment program, he enrolled on the very same day.

At his first review, Derek could see that his thin strands of hair had already started to thicken up and his frontal hairline was also beginning to regenerate. Encouraged and pleased by these early results he asked his consultant if he could get a copy of the progression photos so that he could show them to his friends – they had already started commenting on the change in his hair and he wanted to share his hair regrowth journey with them.

There was still some way to go, but Derek (and his friends), felt confident that even greater results could be achieved over the coming months. 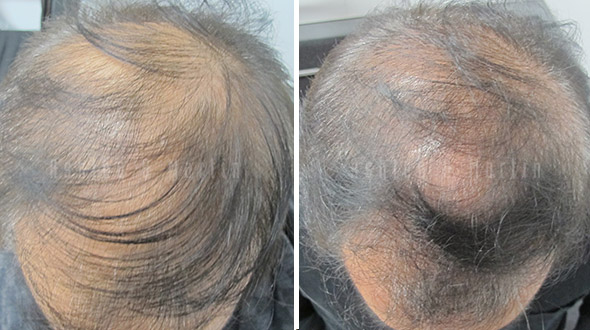