A 30 year old male presented with established hair loss, having first noticed approx. 3 years ago. Both grandfathers had hair loss issues. Before I could examine his hair loss I had to overcome bad hair care techniques and remove an antiquated hair piece that had been applied by another hair loss company as their solution! He had been wearing this for 8 months but it was driving him crazy!

After removing the very poorly applied hair piece, what was revealed was a Genetic Pattern equal to a level IVa – V  Male Pattern Hair Loss. There was obvious signs of growth and an opportunity for him to grow his own hair rather than have a hair piece.

The client commenced a 12  month RealGROWTH® program which included RealGROWTH® solution and tablets. As the client was not located near a clinic, he also purchased a Laser Cap device and applies this every second day.  At the end of his first program, he could not believe the difference, and is stoked that he can grow his own hair and it looks so good. Sure he knows that he won’t get a full head of hair back, but he would rather grow his own hair and is really pleased with the way it looks.

He has consistent hair coverage over the area that was previously covered by a hair piece applied with bad hair care techniques. He is continuing with his program and half way through his first 12 month maintenance plan. Photos  show the comparison between where he started ( after removing his hair piece )  and what he had managed to achieve within a 12 month period. 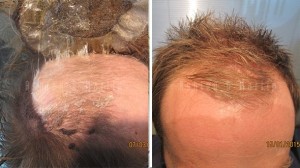