Case Study: Weight Lifted from Client after Impressive Results with Ashley and Martin

Matt* started to lose his hair at the early age of 18.  In three short years he had gone from a youthful, full head of hair to needing to grow his hair into a comb-over to try and cover up the sizable balding patch on his crown and in his temples.

His hair loss had been so startling that he had spoken to his GP about it.  Matt had expected hair loss as his father and grandfather had gone bald, but he had never expected such rapid loss before he had finished his teenage years.  He told his doctor that he had tried using a hair loss solution that he had gotten at the chemist, but it had not stopped his hair from falling out.  After ruling out any underlying medical conditions the GP prescribed medication known to have positive effects for hair loss.  Unfortunately for Matt this did not produce the changes he was looking for either.

Now 21 years old, Matt responded to an advert he had seen on the television by going online to contact Ashley and Martin.  His consultant listened and understood as he described how his hair loss had affected his self-esteem, she then discussed family and medical history with him. She diagnosed Matt with Male Pattern Hair Loss, Norwood Va and presented him with a way to achieve the outcomes he was hoping for.  Both Matt and his girlfriend with whom he had attended the appointment with were delighted that help had been so easy to find.  He signed up for a RealGROWTH® program instantly.

It did not take long before the effects of his genetic predisposition were reversed and Matt’s hair returned.  The difference was so astounding that it was not just his girlfriend who noticed and commented, but their friends as well.  His friends could not believe the change they had seen take place in under twelve weeks.

At the sixteen week mark Matt was contacted to make an appointment for an Ashley and Martin Review. Matt told his consultant he was pleased to find it had been quite easy to achieve impressive results in only four months. With his hair returning Matt felt much happier; a weight has been lifted. 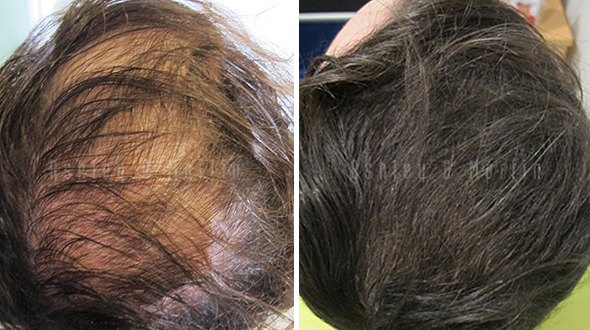 Steven’s* friend had been watching him gradually lose his hair over the last decade; it had started right after they had left school at 18 years old.  Over the years Steven had tried several over the counter remedies available at the chemist, but his hair continued to aggressively recede along his parietal ridge.  When Steve turned 25 he started to give serious thought to seeking medical intervention.  It weighed on his mind for several years before he said anything, he thought maybe people would think it was ridiculous for him to want to see a doctor about his hair loss.  To Steven’s surprise the friend he spoke to was incredibly supportive and suggested he call Ashley and Martin as he knew people who had used our services and gotten wonderful results.  He completely understood how losing his hair had affected Steven’s self-confidence and that he needed to seek treatment for this issue to help him feel better about himself.

A quick phone call later and Steven was booked in to see a consultant to discuss treatment for his hair loss.  He decided to take his partner with him to the appointment so they could make the decision together.  He trusted her opinion and she supported his need to treat his hair loss.

The couple were pleased to find that while Steven was the one who was experiencing the problem, the consultant recognised that this was a decision they would make together.  He addressed them both, made Steven’s partner feel included in the process and answered any questions that she had about the treatment.

The consultant recommended a full medications plan to treat Steven’s advanced hair loss.  Being health conscious, Steven and his partner were unsure about taking all the medications included in the program and asked about the efficacy of the treatment should he chose not to take all of them.  After hearing all the information and the likely outcomes from different treatment options, the couple decided to go home and talk it over.

A few days later Steven called and told his consultant he had decided to go ahead with treatment.  The consultant put together a RealGROWTH® medications plan that had been tailored to meet Steven’s needs and he commenced treatment immediately.  As the hair along his parietal ridge stopped shedding excessively and began to grow back Steven found his confidence returning.  He knew the regrowth would take longer than if he was on a full medications plan, but he was very happy with the changes he was seeing and was excited to see further regrowth as time went on. 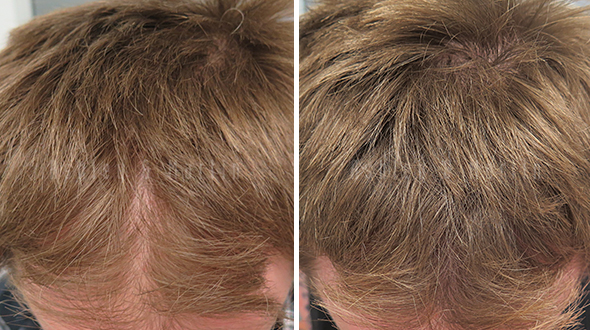