Luke’s* hair loss was especially advanced for only nineteen years old.  He was so concerned about how much hair he had lost in just six months that he went online to learn why it was happening so fast and if there was any help available to him.  Luke came across the Ashley and Martin website and, after reading about the different types and causes of hair loss, used the online enquiry form to book an appointment to speak to a Hair Loss Consultant.

Upon examination his consultant expected that Luke would be able to recover all of his hair.  She could see that there were still a great number of viable hair follicles that were in their dormant phase.  The RealGROWTH® program would prompt the dormant follicles to re-enter their growth phase, growing up to four hairs from each one.  Luke was worried that if he did not begin treatment straight away he would lose all the hair from his frontal hair line to his crown in a matter of months.  He signed up for treatment and was given his first Low Level Laser Therapy treatment before he left the clinic.

Over the course of the coming months Luke began to receive positive comments from family and friends about the changes in his hair.  People would often ask him what he was doing to achieve such rapid regrowth.  It wasn’t until he attended a progress check-up after four months on the program that he truly realised what a remarkable change had taken place.  Viewing the photos taken in his initial consult alongside the ones taken minutes previously Luke was astounded at the difference.  He had all but forgotten how thin and unmanageable his hair had been sixteen weeks ago. Luke had been told about his four month Ashley and Martin Review in his initial consultation, but he had not imagined he would be so astounded by the amount of regrowth would achieve. It was with newfound confidence and satisfaction that Luke left this consultant’s office that day. 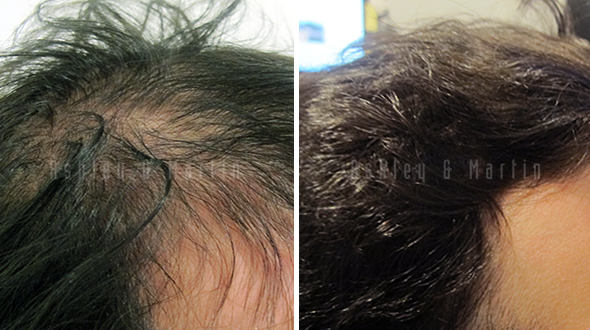 When Dean* began to rapidly lose his hair at 20 years old, he went to the chemist immediately to find out what he could do to stop it from happening.  He was given a herbal shampoo that was designed to stop his hair from shedding, but after four months of using his over the counter remedy daily he saw no improvement.  In fact he could see it was continuing to shed at an alarming rate.

Dean’s hair was shedding so fast that a friend of his could see what was happening and suggested he contact Ashley and Martin for help.  Having never heard of our company, Dean went online to read reviews and find out a little more about the success of medical hair regrowth treatments.

After using the online enquiry system to book an appointment at his nearest Ashley and Martin clinic, Dean attended a free consultation.  During a scalp examination the consultant could see that he was suffering from early, but noticeable, hair loss in the crown area that was moving forward.  He was diagnosed with Male Pattern Hair Loss, Norwood IV and the consultant went over the genetic factors behind why he was losing his hair.  She explained how the medications in the RealGROWTH® program would work together to restore his hair growth cycle to a natural state and regrow the hair he had lost to date.  Feeling confident that everything had been explained to him and he was aware of the benefits and limitations of treatment Dean enrolled during his first consult.

Initially making use of the Low Level Laser Therapy included in his treatment plan, Dean attended the clinic regularly at the beginning of his program.  Life, however, was hectic and he was unable to find time to continue attending the clinic regularly.  He did continue to faithfully apply his solution and take his medication daily.  His consultant called him four weeks after he had started using the medication to check how he was going and he said he was finding it easy to follow his program.

Feeling less self-conscious than he had when he first called Ashley and Martin, Dean attended an Ashley and Martin Review to assess progress on the program. His confidence was returning along with his hair and Dean was pleased to see the hair begin to cover over his thinning crown again. 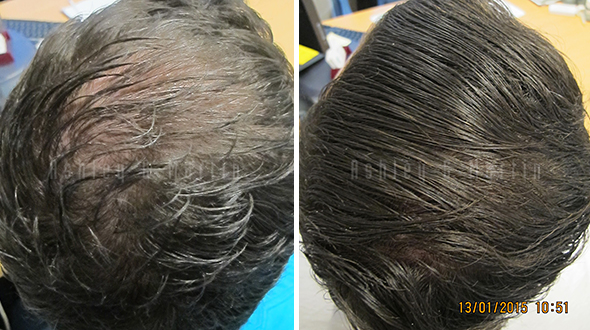