Thirty-nine year old Cole* came to Ashley and Martin for help after he had been losing his hair for six years. His higher than normal shedding had left Cole with fine, sparse hair from his crown to his frontal hair line. The significant thinning he had undergone had left a small amount of hair right in the front with deep temporal recession on both sides. After researching hair loss clinics online, Cole had found Ashley and Martin. After four years of thinking about treating his hair, it was time to take the first step to doing it. Together with his wife, he attended the free consultation he had found out about on the Ashley and Martin website.

The consultant asked Cole some targeted questions relating to his health, stress levels and family history of hair loss. Aside from a skin condition, Cole was in good health and did not suffer from overt levels of stress. He did, however, have a family history of hair loss. Cole’s father was also balding. A scalp examination confirmed that Cole was suffering from Male Pattern Hair Loss. His consultant placed his advanced hair loss at a level IV on the Norwood Hair Loss Scale.

His consultant went on to explain what would be involved in treatment for Cole. She believed that a comprehensive RealGROWTH® medications program would be the best hair loss treatment available for his stage of hair loss. Both Cole and his wife were encouraged to ask as many questions as they needed about the proposed treatment plan and each hair growth product was explained in detail. The couple were satisfied that Ashley and Martin’s RealGROWTH® program was the best way to regrow hair for Cole and signed up immediately.

It was a decision neither of them ever regretted. In less than four months Cole’s hair had regrown substantially, especially throughout the crown. He was thrilled that the program was so easy that he could do it while working away from home on a regular basis and no one ever needed to know. It put a smile on Cole’s face to see the phenomenal success his program had been. 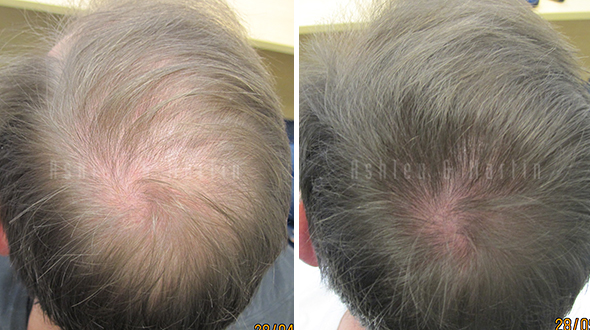 It had been quite some years since Doug* had first noticed his hair beginning to thin. With his partner urging him to seek treatment for his hair loss, a family member recommended he call Ashley and Martin for help. Without hesitation, Doug picked up the phone and made an appointment to speak to a Hair Loss Consultant.

The 42 year old told the consultant he was hoping to find someone who could help him stop his hair from falling out and regrow it again. After a scalp examination in which Doug was diagnosed with Norwood IV Male Pattern Hair Loss, his consultant explained to him how the RealGROWTH® program would work to achieve his goals. Initially the medication would slow the hair loss to a healthy rate of shedding and then he would begin to see his lost hair begin to regrow.

Doug took three days to think everything over after his initial consultation. In the end he decided that he was not going to accept this genetic hair loss as something he had no choice in. His brother may have been comfortable accepting that he had to lose his hair, but Doug was not. After attending an appointment with the clinic hair loss doctor, Doug was ready to start his RealGROWTH® program. And although he did not attend laser therapy appointments as regularly as recommended by his consultant, he was diligent with his daily medication routine.

Four months after beginning his treatment, Doug was due for his first Ashley and Martin review. At this progress check-up the consultant checked Doug was not having any trouble adhering to the medication routine at home and took a second set of photos to compare to the ones taken in his initial appointment. After comparing these photos Doug was delighted with the results. The regrowth had worked exactly as expected and he and his partner were thrilled. 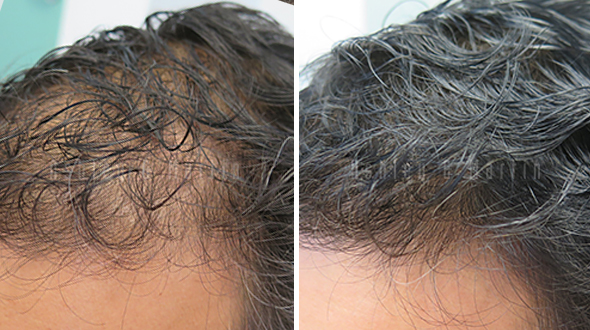