Part of what prompted Andy* to want to solve his hair loss problems was the fact he was getting married in six months. He wasn’t sure if that was enough time to fix the problem, but it was worth finding out.

In just two years his hair loss had gone from non-existent to blatantly obvious. At 25 years old, he was just not ready to lose the rest of his hair yet. He called Ashley and Martin hoping there was a hair loss solution for men that would work for him. And work quickly.

With a family member along for support, 25 year old Andy attended his free consultation. He had already tried various shampoos to solve the problem, but clearly that had not worked. His consultant explained why an approach like this was unlikely to produce results and laid out the complex approach of the RealGROWTH® program in detail.

Together, both Andy and his grandmother listened to what the consultant had to say about both the likely outcome of treatment. And, after being given the opportunity to ask as many questions as they liked, Andy signed up for treatment at the behest of his grandmother. She had already watched both her sons go bald and wanted what was best for Andy.

With regular use of his RealGROWTH® program, Andy’s hair began to return rapidly. By the time he returned for his first Ashley and Martin Review, one month before his wedding, Andy’s hair had grown thicker and healthier. This increase in density gave Andy the confidence to stand up in front of all of his family and friends without feeling self-conscious about his hair.

Andy was so impressed with the results of his RealGROWTH® program that he raved about it to a friend of his who needed help with his own hair loss issues. His friend, having seen the proof that Ashley and Martin’s hair loss treatments worked, booked his own consultation and has never looked back. 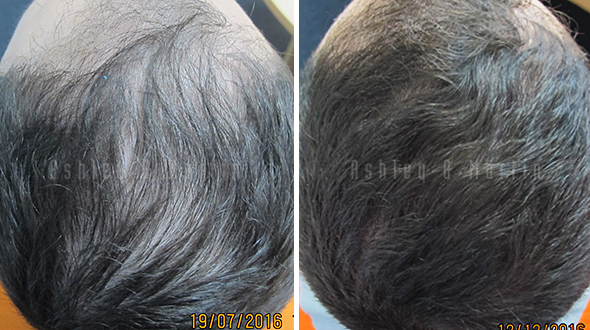