Case Study: Sceptical Client Has to Admit He Was Proven Wrong

Convinced Ashley and Martin’s medical hair loss treatment would not work, Heath* was extremely sceptical when he attended his free consultation. And while he held no hope that the products on offer would do anything, he felt he had no choice but to try it for himself. In addition to his conviction that the treatment would not yield results, Heath was also sure his condition could not be genetic. His father still had a full head of hair so to him, it stood to reason that he was not suffering from male pattern hair loss.

After discussing his health, stress levels and medical background, the consultant Heath met with performed a scalp examination. Diagnosing him with a Norwood III vertex loss, she explained how his hair loss was genetic even though he had not seen family members with the same problem.

A week after his initial consultation, Heath reluctantly called the clinic and enrolled in the shortest medical hair loss treatment program with a chance of producing results. He was still convinced the treatment would not work and was looking to minimise his losses while he proved himself right.

Although it had been recommended that Heath attend the clinic regularly to undergo laser therapy treatment, his busy lifestyle and stressful job prevented him from doing so. He did, however, faithfully treat himself with his RealGROWTH® medication and supplements at home.

It surprised Heath when the results of his program were obvious enough that he started receiving positive comments from his family. He was even more surprised to see the glaring differences between the photos that had been taken in his initial appointment and his four month Ashley and Martin Review appointment. Heath’s confidence in the workplace had increased due to the results of his treatment. And he had to admit, despite his scepticism and inability to attend laser therapy, Ashley and Martin’s RealGROWTH® medical hair regrowth program did everything it promised, and quickly. 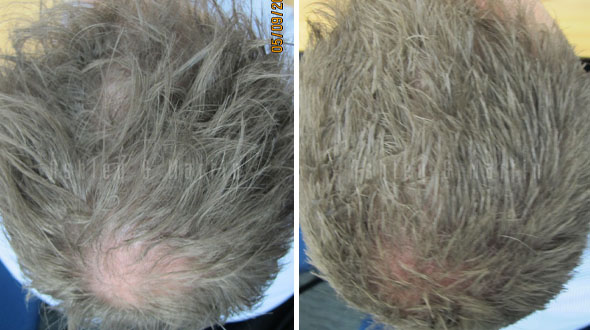 Keith’s* hair loss was wreaking havoc on his confidence. An ever-widening part line was causing him a great deal of concern and so, after finding Ashley and Martin online, he attended an appointment with his parents along for support.

Although only 22-years-old, Keith had become extremely diffident and introverted. This change in their son’s demeanour troubled Keith’s parents. Socially, Keith was suffering due to the crisis of confidence his hair loss was having on him. Keith’s father knew how his son was feeling, he himself had fought the losing battle against hair loss, as had his brothers.

Upon examination, Keith’s consultant could see that although he had only been noticing the hair loss since he turned 20, it had clearly been longer than two years since the excess shedding had started. At 22, his diagnosis of Norwood Level IV male pattern hair loss was further advanced than average for his age.

Concerned about their son, Keith’s parents supported him in his decision to treat his hair and a week after first meeting with his consultant Keith had returned, ready to start his medical hair regrowth journey.

Although Keith struggled to attend laser therapy appointment regularly due to transport issues, he took his oral medication nightly and remembered to apply his topical solution at least five nights a week. And although he was not fully participating in his program, Keith found his hair responded well. So well that his family could all see the difference it was making to both his appearance and his demeanour.

It was an extremely happy and much more outgoing young man that attended his first Ashley and Martin Review. The startling difference sixteen weeks of treatment had made to Keith was astounding. Part way into his treatment, Keith’s dormant follicles had re-entered their growth phase and the hair across his crown had increased in density tremendously. With his treatment from Ashley and Martin, Keith had become the young man he used to be.