Aarav* had grown up seeing his father develop a balding patch at the front of his scalp. And like their father, Aarav’s brother had developed the same hair loss throughout the frontal region of his scalp. Aarav himself had noticed his hair getting thinner across his crown, frontal and temporal region. He was only 22.

Not wanting to end up like his father and brother, Aarav did not waste time trying pharmacy products and home remedies. He searched online for a hair loss solution that had evidence to back up its claims and a good reputation. Finding Ashley and Martin, Aarav made contact through the online enquiry form and was pleased to see how quickly he received a call from someone to discuss booking a free consultation.

It took Aarav a few days to think about everything he had found out in his initial consultation and begin his RealGROWTH® program. He had received a scalp examination which indicated he had been losing his hair for at least two years and, as suspected, was caused by genetics. Photos of his hair had been taken from multiple angles so that if he did choose to proceed with treatment, he and his consultant would be able to accurately assess his progress on the program and adjust accordingly if needed.

And he was thrilled that he had made the decision to commence treatment. In just a few short months his medical hair regrowth program had produced an almost full recovery and he had the photos to prove it. His frontal hair line had gone from thin and wispy to thick and strong. His hair had increased in overall density, filling in the gaps from his frontal region to his crown. Beaming, Aarav looked at the difference between the photos taken today and the ones from his initial appointment. Ashley and Martin had delivered on their promises and put control over his hair loss in his own hands. 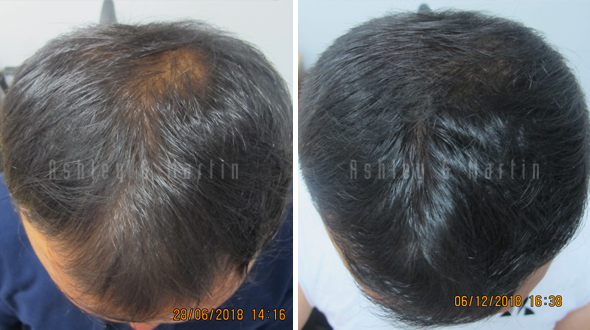