Darren* was not particularly impressed when his hair loss began to show. He had been using a caffeinated shampoo that was supposed to stop his hair loss, but it certainly did not appear to be working. His hair was thinning and there was no disguising it now. Knowing that treatment had been playing on his mind for the past couple of years and that he was not happy with the changes to his appearance, Darren’s partner strongly encouraged him to seek help from the same company that had helped his friend. And knowing better than to argue, Darren called Ashley and Martin to book an appointment for himself.

Speeding through his story, Darren outlined his family history of hair loss. Brother, father, both maternal and paternal uncles and a grandfather. All the men in his family experienced hair loss, but Darren was not ready to give in to it just yet.

Upon confirming Darren fully understood everything that was involved in treatment, the consultation was at an end shortly after it had started. Darren already knew how the treatment program worked and had seen it produce fantastic results for his friend. He was ready to sign on the dotted line as soon as he had heard it would work for him too.

Even though he had seen medical hair loss treatment work for his friend, it was still exciting to experience it himself. His confidence in the program grew as fast as his new hair did. His sister, who had been living overseas was taken aback at the change she could see when she came home. And after four months on the program he purchased a portable laser treatment device for himself to use at home instead of coming into the clinic. After meeting with his consultant to assess the progress he had made on the program after sixteen weeks, Darren was so happy that he spent the night celebrating over a few drinks with his mates. 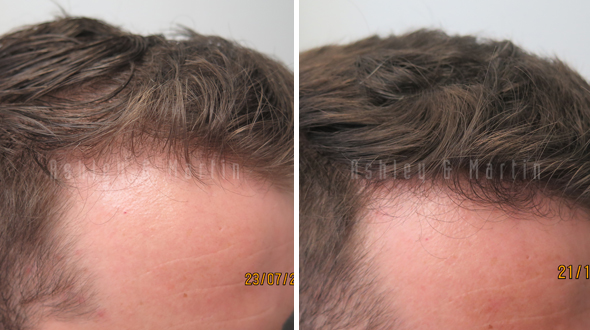