Hair loss in Clint’s family had passed from father to son. The hormone that had in their younger years, been responsible for hair growth, was now being transformed into the androgen causing their follicles to miniaturise and become dormant. Twelve months previously, 47-year-old Clint had been especially stressed from pressures at work. It was at this time he began to notice his hair loss increasing. Calling Ashley and Martin for help, he booked an appointment around his hectic schedule to discuss the treatment options available to him.

Between young children, work and emergency call outs Clint struggled to find the time to attend laser therapy appointments at the clinic. But thankfully, the majority of his program took place at home in the evening and was quick and easy to perform each night before bed.

Clint’s first Ashley and Martin Review appointment took place after he had been faithfully following the home-based portion of his program for four months. And while Clint had watched his hair filling out first hand, it was hard to believe just how far he had come in only sixteen weeks. The start of his program was a roaring success and he was pleased he had called Ashley and Martin after hearing about the medical hair loss treatment on the radio. Perhaps he should have done it two years ago when he had first thought about seeking treatment. 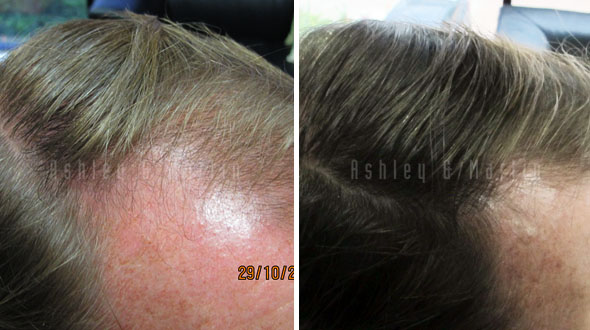