Fifteen year old Tyler* was worried he would be completely bald like his father before he reached 20. Hair loss was prevalent in his family going back generations and, having already been losing his hair for the past year, he was concerned about it affecting him so early in life. Almost as soon as it had started he had begun thinking about seeking treatment. Tyler had heard about Ashley and Martin on the TV and knew he did not need to wait any longer to reach his turning point.

Meeting with an Ashley and Martin consultant, Tyler and his father discussed the treatment path they had already tried through a dermatologist. While they felt the hair loss may have slowed using the oral treatment, they had not been successful in regrowing hair.

After a scalp examination, the consultant diagnosed Tyler with a Norwood level II loss. Initially it was his frontal hair line that had concerned Tyler the most, but after seeing photos taken from every angle, his crown worried him the most. A scalp condition and the idea of going bald like his father so young had prompted him to see a dermatologist initially. Without results there, he was determined to find a way to prevent the family trait quickly.

Due to his age and scalp condition, the consultant booked Tyler in to speak with the clinic hair loss doctor before moving forward. It was a great relief to Tyler to find that although not all the components of the RealGROWTH® program would be suitable for him at this stage of life, treatment was still available. He was prescribed a topical solution to apply to his scalp daily and was encouraged to attend regular laser therapy appointments in the clinic.

Four months of weekly laser therapy and daily application of his RealGROWTH® solution provided the results he had been looking for when approaching his dermatologist. His hair loss had been reduced to a natural rate of shedding and he had begun to regrow hair. Parents and son alike were thrilled with the decision to call Ashley and Martin for help. 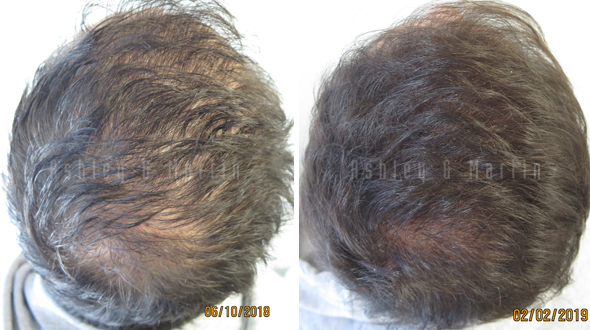