Ben’s* self-esteem was taking a hit, he was only 22 and already he had drastic hair loss. He was trying over the counter vitamins and shampoos without any success. Having heard of Ashley and Martin on the television Ben thought it would now be a good idea to speak to someone who specialised in hair loss.

Having used the online enquiry system on the Ashley and Martin website Ben was now meeting with his consultant for the first time. Performing a scalp examination Ben’s consultant noted generalised thinning from the hairline to the crown. Ben was young, fit and healthy but baldness ran in the males of his family through his father and grandfather.

The consultant explained to Ben that as genetics was one of the leading causes of hair loss in men, Ashley and Martin had designed a specific program to help in this situation. Unfortunately Ben had inherited his loss from his family. With a combination of anti-androgens, topical solution and herbal supplements Ben’s consultant was confident he would regrow hair, giving him a fuller, thicker head of hair.

Ben was concerned about the way he looked, as a marketing officer he needed a confident persona. His hair was certainly not projecting the image he wanted. Without further delay he signed up for the Ashley and Martin RealGROWTH® program taking home his non-prescription hair growth products to start using straight away. In the following days he returned to see the Ashley and Martin doctor who prescribed the rest of the products included in the program.

After four months attending regular low level laser therapy sessions and following the program at home Ben returned for his routine checkup. Looking at his updated photos Ben knew he had found exactly what he was looking for. He now had a thick head of hair from his frontal hairline to his crown. Had Ben not acted when he did he would have been in danger of balding, he no longer felt this was a risk and the confidence was oozing. 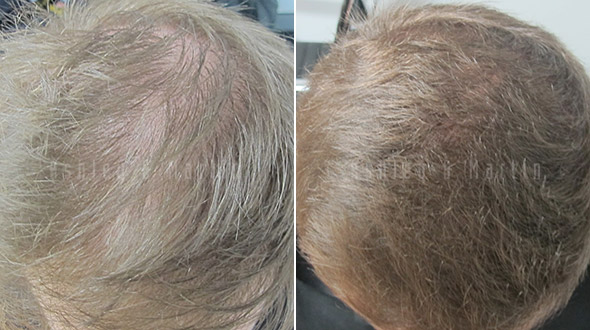